MEA neurochips are a valuable tool to detect compound effects on neuronal maturation. By use of the MEA neurochip technology we can directly monitor and characterize maturation of primary mouse or human iPSC-derived network activity in electrically active neuronal networks.

Compound application during maturation (either single or repeated) can affect the onset of spontaneous network activity and the maturation of both individual neurons and whole network characteristics.

We assay the electrical activity patterns of dissociated primary neurons in culture from an early embryonic stage up to 6 weeks of maturation in vitro. The activity fingerprint is described by more than 200 parameters, which allows a sensitive measure for functional maturation and the effects of biologics and chemical compounds thereon to assess effects on synaptogenesis and neurogenesis.

Images: Functional maturation is followed over 4 weeks and can be accelerated by repeated or single compound application. 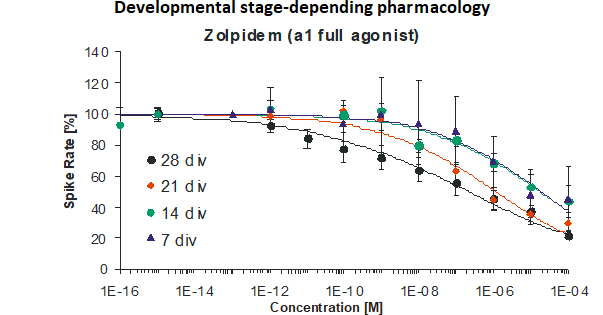 For developmental pharmacology read more on our SfN2012 poster.